We are now paying dearly for this extra heat. One sixth of the electricity consumed in the United States goes to cool buildings, at an annual power cost of 40 billion dollars. Moreover, a 5 degrees Fahrenheit heat island greatly raises the rate at which pollutants — nitrogen oxides and volatile organic compounds emanating from cars and smokestacks — ‘cook’ into ozone %hellip; The Los Angeles heat island raises ozone levels 10–15 per cent and contributes to millions of dollars in medical expenses.

The Urban Heat Island (UHI) effect occurs when an urban area is warmer than surrounding areas. This typically happens in city suburbs and towns as the land surface is modified with materials that retain heat, such as dark roads and roofs. Lack of trees and greenbelts contribute to the problem, as does waste heat created by energy use. Mitigation strategies include planting more trees to create canopies, greening roofs, and using pale surfaces on roads and paths. In this chapter we look at studies from around the world.

Black roads and roofs in addition to a lack of trees cause soaring summer temperatures in Chippendale. By creating pale roads and roofs, and growing tree canopies over half the roads we could reduce the summer heat in the suburb by 6–8 degrees Celsius!

This map shows the temperatures of the suburb’s roads between 1:00 a.m. and 6:00 a.m. on 6 February 2009. The roads — which constitute over 23 percent of the suburb’s land area — were over 34 degrees Celsius. The houses, private land and parks were around 29 degrees Celsius. The roads act like night-time radiators by surrounding the suburb with hot air and making the buildings hotter at night. As a result the roads are still hot when the sun rises and the next day is hotter than need be, both inside houses and on the streets.

The heat dries out the trees and soil, which stunts tree and vegetation growth. To stay cool residents and businesses turn on air conditioners. Thus, the suburb’s roads are driving up electricity costs for everyone and increasing the pollution from the coal-fired power stations that provide the electricity. Think of all the electricity we’d save, and how much less pollution in the atmosphere, simply by creating pale reflective roads and increasing tree canopy cover.

The hottest roads on the map run east–west. They have the largest amount of black road surface exposed to the sun and are the least protected by buildings and trees.

The north-south roads are partly protected from the western summer sun by the buildings and have larger tree canopies (some of the trees grow larger than others in the east-west streets).

The effect of the roads, no matter the direction they face, is to increase the temperature of the whole suburb. This burdens the suburb, and all that lives within it, with an invisible island of hot, damaging air.

No law, design guidelines or goals have been put in place to make these hot roads cool. Until now. This plan offers affordable, easily constructed and maintained solutions to the Heat Island Effect in Chippendale.

And we can learn from suburbs and cities which have implemented changes to great effect. Let’s look at some success stories.

The suburb of Village Homes in the city of Davis, California is 6 degrees Fahrenheit cooler than the adjoining suburbs in summer. This is because the village contains 23 acres of greenbelts, orchards, vineyards, vegetable gardens and edible landscapes. The resulting tree canopies regulate temperature. Since 1978 the village has grown over 24% of its food in the streets and gardens. For more information see their Village Home Owners Association website. 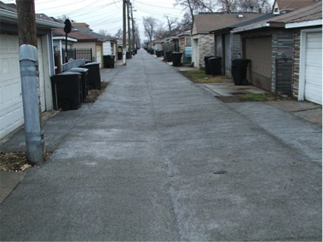 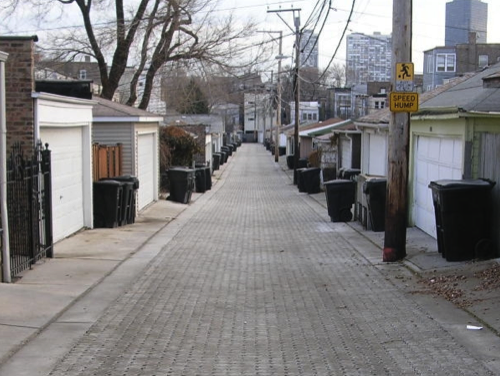 One study analysed the costs and benefits of increasing numbers of street trees. By doubling the number of street trees they believe the city’s temperature can be reduced by 1.2 degrees Fahrenheit (.7 degrees Celsius). Planting the street trees would cost an estimated 625 million dollars and, with annual savings of 98.4 million dollars, it would pay off in just over six years. (See Kerr and Yao, quoted in Rosenthal, Crauderueff and Carter, 2008 [PDF])

In 1998 the South Korean city of Seoul removed a 12-lane freeway in the city centre and opened up a built over river. The reinstatement of the river led to an average reduction in summer temperatures of 3 degrees Celsius. Property values rose dramatically, and the river and its banks became a magnet for pedestrians, tourists, businesses and biodiversity. Traffic was reduced as well as travel times. The city integrated a broad range of travel solutions. For example: varying opening and closing hours of businesses and improving public transport options.

The Sustainable South Bronx project in New York is working to reduce the Urban Heat Island effect partly by greening the roads and creating parks. Their research confirms the damage done to human health by the combination of heat, road traffic, and lack of vegetation to clean and cool the air. Analysis of the impact of air pollution from vehicles suggests that potent environmental pollutants “at levels recently encountered in New York City air may adversely affect children’s cognitive development … with implications for school performance”(FP Perera, et al. Effect of Prenatal Exposure to Airborne Polycyclic Aromatic Hydrocarbons on Neurodevelopment in the First 3 Years of Life among Inner-City Children [PDF], Environmental Health Perspectives, 2006). With 1 in 4 children suffering asthma, greening one of the most polluted parts of New York was seen as a necessity.

US Department of Energy, Guidelines for selecting cool roofs, page–6

A study in urban heat mitigation using green roofing shows that savings can be substantial. One study estimated that cool roofs could reduce New York City’s heat island by 1 degree Fahrenheit (.6 degrees Celsius). They estimated savings of 105 million dollars per year — 23 million dollars in direct energy savings and 82 million dollars in indirect savings — if cool roofs were constructed on every roof in New York City (calculated at an average additional cost of 68 cents per square foot, compared to traditional roofing techniques). Under certain assumptions the cool roof payback period was about six years. See Kerr and Yao, quoted in Rosenthal, Crauderueff and Carter, 2008 [PDF].

The use of higher albedo surfaces offered the most favorable cost/benefit ratio in this analysis. The maximum peak electric demand reductions were estimated as 74.29 megawatts from planting street trees in 50 per cent of available space citywide; and 200.99 megawatts through 50 per cent implementation of light surfaces throughout New York City.

Reducing the Urban Heat Island effect is not the only benefit of trees. As research from Portland’s urban forest demonstrates, the benefits are wide and far ranging:

Portland’s street trees are responsible for almost 750,000 dollars in avoided energy costs, and over 13 million dollars in property resale value is attributable to the presence of street trees.

Annual environmental benefits provided by the entire urban forest canopy exceed 38 million dollars and will exceed 43 million dollars when the goal of 7 per cent more land covered by tree canopy (25 per cent increase) is met. (p 2).

Research and references for these calculations include:

Trees improve ambient air quality by absorbing atmospheric pollutants and lowering atmospheric carbon dioxide levels by transforming atmospheric carbon into plant tissues. Trees intercept and calm winds channelled by the urban landscape. Their transpiration and shading mitigate the Urban Heat Island effect. Reduced demand for heating and cooling results in a net decrease in carbon dioxide and other pollutants introduced into the atmosphere as a result of avoided emissions. In addition, trees act as carbon reservoirs by removing carbon dioxide from the atmosphere, releasing the dioxide and retaining carbon in their tissues. (p 5)

If we plant trees and change the colour of our roads and roofs from black to pale colours we will create multiple benefits. We will cut electricity bills and save money, increase bird and insect life, increase plant growth and significantly reduce our environmental footprint from less pollution.

Mitigation of the Urban Heat Island effect is a major part of the Chippendale Plan, and will be demonstrated throughout. But it is only one side of one story. Next, we’ll look at the comprehensive plan for our streets.

Our review of the literature, though not exhaustive, provides strong evidence that Urban Heat Island mitigation strategies such as cool roofs, living green roofs and urban vegetation can play a role in reducing urban electricity demand, improving air quality, cooling the urban environment and diminishing storm water runoff pollution. Though these roof projects are just a small part of emerging green building technologies, they can help to offset the carbon footprint of existing and new buildings, while providing additional value and environmental improvement.

We conclude with three recommendations for New York City with regards to the two main approaches discussed in this report, cool and green roofs: the city must support further research with community-based organizations for effective place and neighborhood-based heat island mitigation strategies; the city must continue to expand efforts to address summertime heat as a public health issue; and the city must develop and phase-in additional mechanisms and policies to support climate adaptive strategies in the built environment, and ensure they are adopted in major development projects.

New York City has taken several meaningful steps to provide incentives for the implementation of green and cool roofs, to encourage market transformation and save municipal dollars. Heat island mitigation strategies have been incorporated into the Mayor’s PlaNYC 2030 long-term strategic plan. The city’s new building code, effective July 2008, was amended to enable green roofs through inclusion in the code and to require all flat or low-sloped roofs to be covered by a white or Energy Star reflective roofs for at least 75 per cent of the area of the roof or setback surface, along with other green building provisions.

A green roof incentive was also incorporated into PLaNYC. The City supported a one-year property tax credit of $4.50 per square foot of roof area converted to green roof, when at least 50 per cent of the available roof is greened. SSBx advocated, along with partners in the Storm Water Infrastructure Matters (S.W.I.M.) coalition, for passage through the New York State legislature of the bill that enabled this tax abatement to take effect in June 2008.

According to S.W.I.M., this incentive can potentially cover approximately 25 per cent of the costs associated with the materials, labor, installation and design of a green roof. The City will need to develop a transparent and expeditious process to effectively encourage private building owners and developers to use the incentive. Plans should be further developed and dates confirmed to phase these incentives into place and to evaluate their effect, on both the environment and the creation of green-collar jobs, to support the greening and cooling of New York City’s neighborhoods.